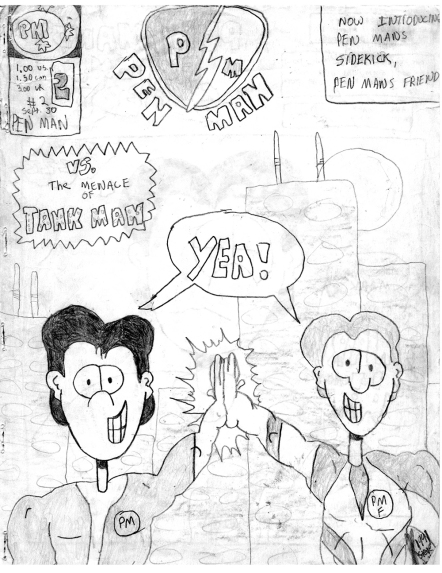 Issue eight is done and Folder Man has arrived.

Pen Man. Folder Man. It is what it is.

Actually, when I first gave Mike his powers (way back when) in issue #2 of the original series, he was given the unfortunate name “Pen Man’s Friend.” Yep, that was his superhero name. You can see, in the amazing cover above that there’s even a little PMF logo on his costume.

When you take into consideration a name like Pen Man’s friend, Folder Man is actually a pretty gigantic step up.

Gotta love that high-five they’re giving each other as well. Right?

Issue #9 is starting next week and it is by far my favorite of this new series.

In other site news, you might have noticed that I’ve been slowly updating the Characters tab with new bios, artwork, information, and some cool little power level thingys. I’ve always wanted to do those. I’ll continue to update those as more characters get introduced.

Lastly, if anyone out there uses the Tapastic app, I’ve uploaded the first seven issues as well as the Origins shorts, and everything can be read there. It’s a pretty decent little app that makes reading an entire issue a breeze, and allows you to subscribe to updates. You can find me, and all Pen Man related stuff HERE. Or just download the app and search for my name, or Pen Man, and you’ll find me. It’s only been up there a couple days, but I’m planning on adding two pages a week, the same as I do on the site.

And that’s about it, I guess.

If you were standing beside me, I’d offer up an awkward Pen Man/Pen Man’s Friend high five.

And you’d never speak to me again.